When I looked out of the window, I didn't see anything. Not that I was blind -- I simply happened to stare into a black void, desperately trying to recognise some outlines.

Needless to say my effort had been unsuccessful, it might be worth explaining that my neighbourhood just had a blackout. It takes a second to realise what the fuck just happened when your amplifier says Goodbye! with a minimalistic clicking sound, the lights turn off and you're suddenly in the dark and all on your own. It's even worse when your laptop's battery is dead, your phone is at 10 percent and you feel the urge to take a shit but don't know whether the toilet's actually going to flush and if you'll be able to wash your hands. While my mind is kinda dirty, I prefer to wash my hands as unclean hands aren't my kink.

Anyway, I went into the corridor to get some candles. On my way out of the room I found out that flipping the light switch reflexively wouldn't help me at all when there's no electricity. I also took a pen, a piece of paper and started writing this "post" by hand. God, I forgot how hard this was.

After an hour, the electricity is back and I am able to use a keyboard now!

Today, I mean yesterday, a relative of mine wanted to hear my parents' opinion (mine too) on an apartment she thought about buying. It's located in western Germany. Do I need to say more? Probably yes, as I want to explain why this is not the usual West Germany bashing I love to practise.

See, unlike the GDR which probably never had any golden age, the golden age of western Germany was the 60s and 70s. Two decades after war, economy quickly recovered, thanks to "our American friends" having been very supportive since the 50s. Thanks! So, what do people do when they have lots of money? They spend it on shit which makes them feel great, that is cars, accessoires and houses. The problems which many small towns in western Germany face nowadays is that a lot of real estate was built or renovated in the 1970s and people stopped caring afterwards or died. Too bad the 70s were a horrible decade for interior design and aesthetics. (Ever seen Kubrick's "Clockwork Orange" from 1973? The film's interiors make me feel sick on a physical level.)

The apartment we came to take a look at was such a lost cause. Designed by the architect who also built the house as his own apartment, it features a lot of creepy design decisions. It's like a real life time machine; I was left overwhelmed to see something so out of place from which I didn't think it was possible.

Feel free to take a look: 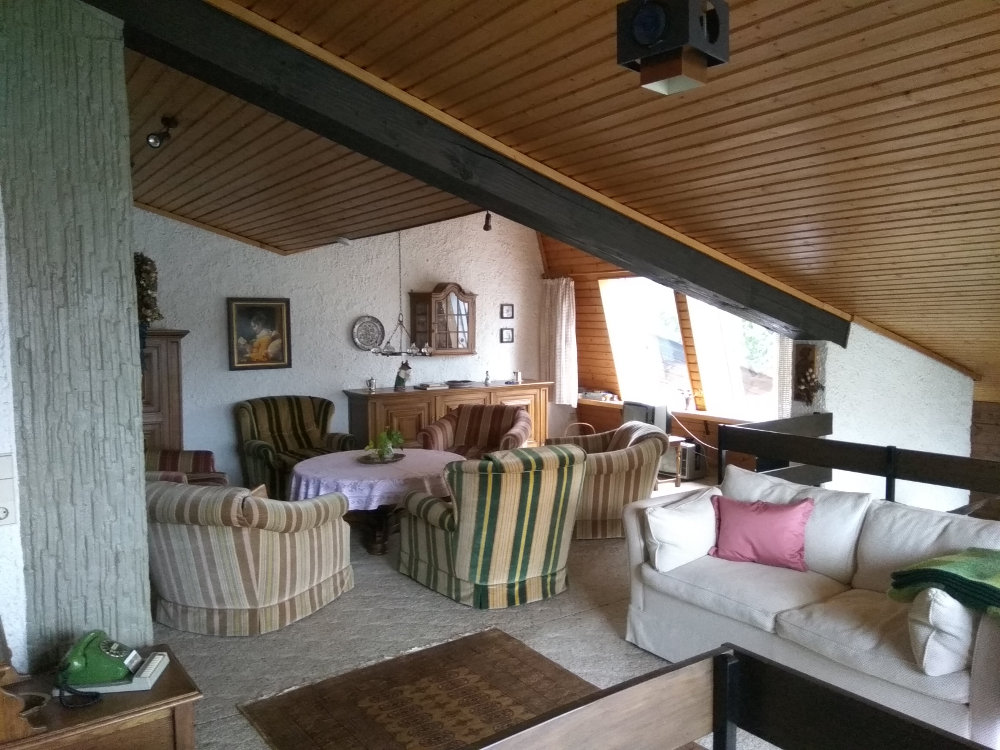 Isn't it beautiful? Mind how no design element fits to anything else. Mind the two old TVs standing around, mind the old stereo you can't see from this angle and the corresponding ABBA cassette. Mind the taxidermied bird and the overkitsched fireplace downstairs. Mind the lack of insulation and mind the various forms of depression you will get when living there.