Two afternoons in the north

On July 6, I packed my stuff (the laptop and a sleeping bag, but forgot things such as shorts and new clothes because I'm retarded) and went to the train station, because I wanted to go to unspecified little village near Hamburg where a friend lives with some other people who have no job and I wanted to visit him.

In Hamburg, it was a pain to get through the masses of police and security[^1] because of the Group of Twenty summit. I knew this, yet I still wanted to go because I'm just as important as the fuckers who rule the world. And I took the train to unspecified little village near Hamburg.

The evening was spent by binge drinking free water in an electronics store where we had fun for probably four hours (and I bought Portishead's debut on vinyl!) and eating expensive shit in an expensive hipster restaurant where your order is tied to a road name from Hamburg. Imagine ordering a burger and receiving a note that says "Kanalstraße", and when your order is ready to pick up a girl with an annoyingly high pitched voice screams "Kanaaallstraaaße!". How extraordinarily clever.

At my friend's place again, we played some Metal Gear Solid 2, a game I played for the first time. What a piece of garbage; the story is probably 60% cutscenes and somebody should tell Kojima he had to direct a game and not a Michael Bay movie. Don't get me wrong: it's nice when you get to play. But in most cases, you don't. So I went to bed at what's been probably 1am.

Eleven hours later, I woke up and we went eating kebab, then we returned. On the way back, we heard some eldery people discuss Bitcoin which was hilarious because it was just a day before that my mate said "you have to invest right now, almost no-one knows Bitcoin yet! Could you imagine old people discussing Bitcoin stocks?"

When I left the house for the last time, a fifty-year-old housemate of my not-that-old mate couldn't resist a sarcastic comment on me carrying my LP. Nice.

After all, the visit was worth it. And the weather was not as shitty as I expected! 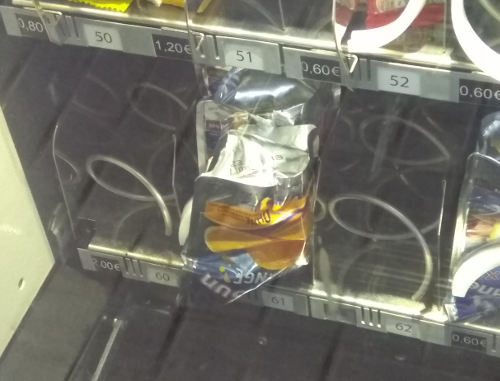 [^1]: Just kidding. There was just slightly more police than usual.